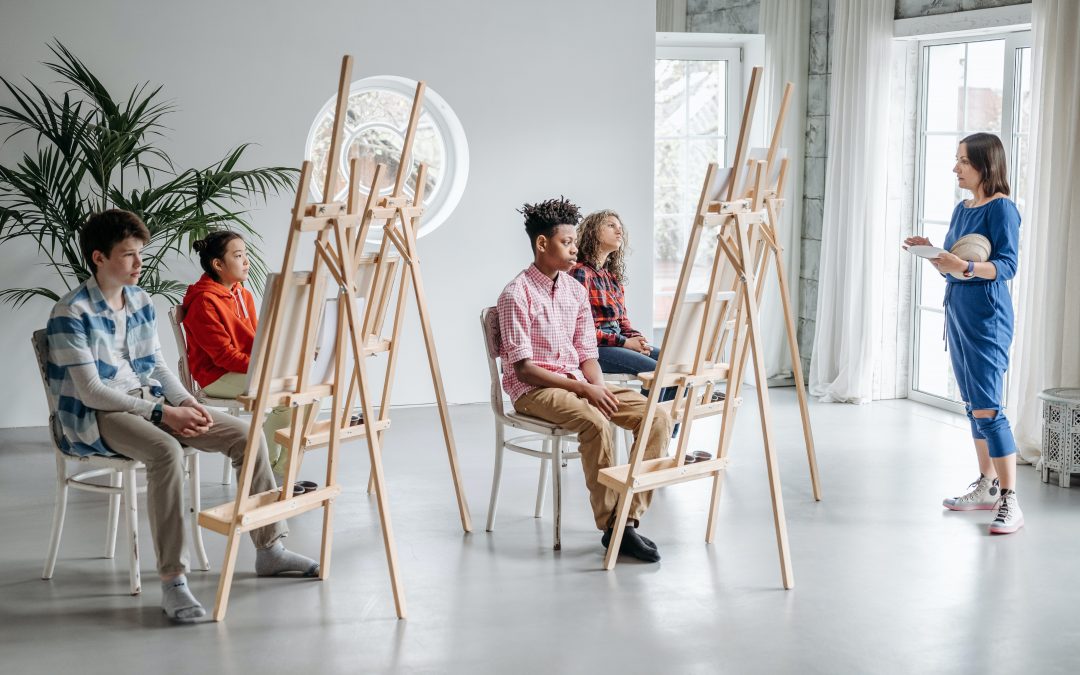 Arts-in-Education: Why It’s So Important

Creative expression through the arts, from music to visual art to writing, has been shown to have cognitive benefits for children, as well as emotional benefits that help children learn self-discipline and emotional regulation skills that can carry over into adulthood.

However, many children today don’t have access to the arts in their classrooms because of budget restrictions or other reasons entirely.

In this post, we’ll explore how the arts play an integral role in education, and why they should be funded at all grade levels and in all areas of the curriculum.

The arts play a vital role in our children’s education. Not only do they encourage creativity, imagination, divergent, and critical thinking, but they also improve emotional intelligence, memory skills, motor skills, literacy levels, and social development.

Benefits of Arts-in-Education Many people think the arts are a waste of time and just plain silly. But it turns out that the arts have plenty of benefits, some of which are important for education. In fact, incorporating arts education into a child’s curriculum can be beneficial.

A recent study has shown that students who have taken music lessons do better in school than their peers who have not had music instruction. Now, you might think these results are due to kids being self-selected by their parents—the same way kids who play sports often do better than those who don’t play sports at all—but what about children whose parents aren’t willing or able to pay for lessons?

Whatever its effects may be, one thing seems clear: the arts are important for education!

How Music Edits Memory. Music’s ability to bring back fond memories has long been recognized. But according to a new study, music is even more powerful than you think—it can actually change your memory of an event. What’s more, it can happen after just a single listen. That’s right: listening to a piece of music might be enough to completely alter how you perceive an experience—and you wouldn’t even know it happened until much later (if ever).

For example, when that new track comes on at your favorite bar—the one with catchy vocals and thumping bass—you could well remember your last visit to that bar, recalling friends or relationships from years past. And then you wonder if those memories are real. In fact, they may be: The brain doesn’t always separate what we see and hear from our experiences. Sometimes, they blend these senses in such a way that they become indistinguishable.

This phenomenon is called cross-modal binding, and it helps explain why music often conjures vivid mental images of things we’ve never seen before, but have heard many times before. When was the last time you heard Take On Me by A-ha without thinking of its iconic video? Or what about “Smells Like Teen Spirit” by Nirvana?

Creative Writing Activates Parts of the Brain. According to a Carnegie Mellon University study, participants who took part in artistic activities (creative writing, music, painting) had stronger connectivity between certain parts of their brains. This means when you learn creative writing skills, you’re also activating other parts of your brain simultaneously. More activity in each hemisphere, as well as between hemispheres, creates a richer learning experience.

The part of your brain that lights up is called the right-hemisphere intracortical network (RIC). This area is involved with higher-order thinking functions, such as critical thinking and problem-solving. In short, it helps you think creatively.

Besides increased activation of these three important regions during creativity tasks like poetry or fiction writing, researchers have observed heightened activity in other areas, including those associated with spatial processing and motor control. Creativity involves both sides of your brain. Another fascinating aspect of creativity is how it involves both sides of your brain working seamlessly.

Arts-in-Education Builds Empathy. Learning about the arts helps children develop empathy. Arts-in-education teaches kids to take a step back from their own perspective, and also helps them imagine what life is like for others. It teaches students that what’s important to one person might not be important to another, and allows them to consider multiple perspectives.

Even better, because arts-in-education teaches students that just because they don’t understand something right away doesn’t mean they won’t understand it later on (after all, even Picasso had his blue period), it also sets kids up for success in other areas of their lives. Children who learn how to ask questions, get answers, and seek more information are more likely to succeed academically and beyond. And these skills come in handy long after graduation day.

This isn’t just an issue for parents or teachers—it’s an issue for all of us. In today’s hyper-connected world, news headlines often shape our views or personal interactions with friends online, rather than objective facts. Many people aren’t even aware that biased information has swayed their opinions or outright lies until someone else points it out. But when we have empathy, we recognize those biases and question why they exist, instead of blindly accepting them as fact.

Learning Through Play Is Valuable. The arts are essential to a child’s education. Play-based learning, such as music classes or martial arts, develops children physically, emotionally, and cognitively. This helps them in school by creating confidence in social situations or developing their self-esteem.

Not only do children learn through play, but they have fun doing it. They can express themselves artistically while having fun with others who share their interests. Through play, children learn how to make friends, while also building social skills that last into adulthood. When we teach our children about art, whether it be dance or painting, we help them develop not just intellectually, but also socially.

Besides teaching creativity, these activities can help kids improve their problem-solving and critical thinking skills. It is important for educators to remember that every student learns differently. Some students may find writing easier than reading, while others may excel at math, but struggle with creative writing.

While some students may need more time on an assignment than others, we should give all students the opportunity to explore their talents and abilities to succeed in life after graduation.

The arts play a vital role in our children’s education. Not only do they encourage creativity, imagination, and divergent thinking, but they also improve emotional intelligence, memory skills, motor skills, literacy levels, and social development.

And it doesn’t matter whether you support your local symphony or just let your kids draw on their own—the point is, art should be accessible to everyone. If you want your child to succeed in school, ensure he or she has plenty of opportunities for creative expression. Don’t limit them to one kind of music, writing, or visual art; give them as many chances as possible to explore different mediums and styles.

Encourage them to try new things without fear of failure. And if you need any more convincing about how important the arts are to education, check out these three facts:

1. Children who participate in at least one form of arts education have higher grades than those who don’t.

2. Students who study music perform better academically than those who don’t.

3. Art programs actually increase attendance rates and reduce dropout rates. It’s clear that we can’t afford to take an all-or-nothing approach to education—and neither can our children.

No comments to show.